KwaZulu (“Place of the Zulu” in Zulu)

KwaZulu-Natal also referred to as KZN and known as “the garden province is a province of South Africa that was created in 1994 when the Zulu bantustan of KwaZulu (“Place of the Zulu” in Zulu) and Natal Province were merged. It is located in the southeast of the country, enjoying a long shoreline beside the Indian Ocean and sharing borders with three other provinces and the countries of Mozambique, Swaziland and Lesotho. Its capital is Pietermaritzburg and its largest city is Durban. It is the 2nd most populous province in South Africa, with slightly fewer residents than Guateng.

KwaZulu-Natal has a varied yet verdant climate thanks to diverse, complex topography. Generally, the coast is subtropical with inland regions becoming progressively colder. Durban on the south coast has an annual rainfall of 1009 mm, with daytime maxima peaking from January to March at 28 °C (82 °F) with a minimum of 21 °C (70 °F), dropping to daytime highs from June to August of 23 °C (73 °F) with a minimum of 11 °C (52 °F). Temperature drops towards the hinterland, with Pietermaritzburg being similar in the summer, but much cooler in the winter. Ladysmith in the Tugela River Valley reaches 30 °C (86 °F) in the summer, but may drop below freezing point on winter evenings. The Drakensberg can experience heavy winter snow, with light snow occasionally experienced on the highest peaks in summer. The Zululand north coast has the warmest climate and highest humidity, supporting many sugar cane farms around Pongola. 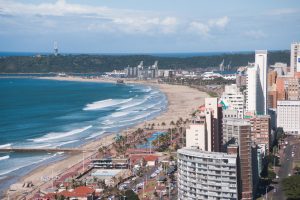 The coastline is dotted with small towns, many of which serve as seasonal recreational hubs. The climate of the coastal areas is humid and subtropical, comparable to southern Florida in the United States, but not quite as hot and rainy in the summer. As one moves further north up the coast towards the border of Mozambique, the climate becomes almost purely tropical. North of Durban is locally referred to as “The North Coast”, while south is “The South Coast”. The Kwazulu-Natal Tourist Board includes towns such as Margate, Port Shepstone, Scottburgh and Port Edward in its definition of the South Coast, while Ballito, Umhlanga and Salt Rock are North Coast resort towns. 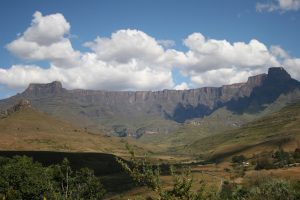 Some visitors come for the annual late autumn or early winter phenomenon on the KwaZulu-Natal coast of the “sardine run”. Referred to as “the greatest shoal on earth”, the sardine run occurs when millions of sardines migrate from their spawning grounds south of the southern tip of Africa northward along the Eastern Cape coastline toward KwaZulu-Natal. They follow a route close inshore, often resulting in many fish washing up on beaches. The huge shoal of tiny fish can stretch for many kilometres; it is preyed upon by thousands of predators, including game fish, sharks, dolphins and seabirds. Usually the shoals break up and the fish disappear into deeper water around Durban. Scientists have been unable to answer many questions surrounding this exceptional seasonal event.